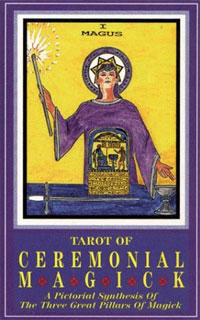 Lon Milo DuQuette has done his usual masterful job of presenting high esoteric material in a manner that can be quite easily understood. He builds Ceremonial Magicked Tarot on the synthesis of what he terms the three great pillars of magick: Astrology, Enochian Magick and Goetia. This information, once assimilated, can be used to understand any other deck that incorporates it also.

DuQuette describes the Tarot as a living mandalla - a pictorial breakdown of the mechanics of creation. In the Tarot he sees a visual representation of it's Qabalistic foundations. In learning to understand the Tarot we come to understand other Qabalistic based systems.

DuQuette sees the Tarot as a wheel, with each card having it's own place upon that wheel. There is a very interesting, easy to follow section acting as an introduction to Qabala that covers the four worlds, the ten Sephiroth and the thirty-two paths. The schematics are easy to follow and give a step by step understanding of the structure of the tree of life.